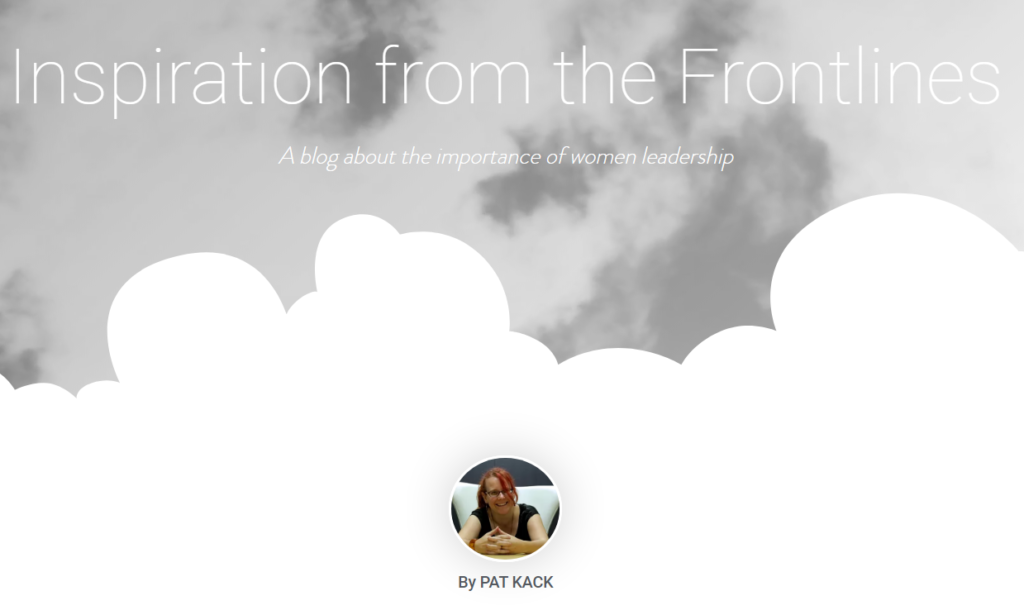 Welcome to my new blog! This is a space to talk about leadership in Tech, women being at the forefront of that and why it matters. Equality will not be possible without women being equally represented in leadership. We are 50% of the population, more than 50% of the workforce, and we need to take our place at the top of business, government and countries.

Why am I talking about this? Who am I? I’m Pat. And being a leader in tech was not what I set out to be 20 years ago, it just kind of happened. I was a high school teacher and a trainer for Bell Canada. I was writing training guides and user manuals and started as a Technical Writer for a software company, back in the early 2000s. I didn’t realize then that I was starting in an industry that would lead the world. It just kinda happened.

We were 8 women for 80 men in that company, it took me a good week to realize that. I showed up, started writing, all the people I worked with in my department were men, the boss was a man, my manager was a man, I had 1 female colleague in my area. So what? I had already worked mostly with men in every job I had done, I was used to being the only woman in the room, it didn’t faze me. I grew up hanging out mostly with boys, played rough with boys, was even called a tomboy. I knew guys, I was comfortable around them, I never really classified myself as other. I definitely felt I was one of the guys and I think most of them thought so too.

10 years later, not much had changed. I was at a conference in Darwin, Australia and working with 30 guys in a room when one of them, maybe 3 hours in says to me “You know you’re the only woman here.” I looked around the room, a few of the guys with us did the same, and we all had the same reaction – “Huh, hadn’t noticed that.” I never walked into a room and thought “Oh crap, I’m the only woman.” That was my normal.

So I guess I never started with the beliefs that hold some women back. “I don’t belong here.“, “They will think I don’t know what I’m talking about.“, or “I’m not good enough.” I just never thought any of that. I walked into that room, I went for the middle, I didn’t hesitate to speak up and never questioned that I would be heard. It’s true I have a big voice, I WAS a cheerleader. Also true I am confident, my mom raised me to believe I could do anything I wanted, so I did. I don’t start from a place of doubt and I think that helps me tremendously. When I walk into a room, I own that room. There is no way anyone will think about who I am or what I look like. Within 2 minutes of me talking, any doubts about me belonging there will be eliminated. No question.

I walked into that room, I went for the middle, I didn’t hesitate to speak up and never questioned that I would be heard.

When I was teaching high school, one of the teacher interns asked me how I established authority in my classroom. “What do you mean?” I wondered. “Well how do you let them know you’re in charge?”, she asked. I opened the door to my classroom and asked the kid sitting in front “Scott who’s the boss?” “You are.” he said. I looked at her, authority established. She thought she needed to be seen as the boss, I walked in as the boss. Big difference. I didn’t know then that this was a major asset I had over many of the women I worked with.

I think that to succeed as a woman in tech or in any male dominated industry, you need to start with the attitude that you belong, you have to eliminate the doubt that you don’t. If you give off the vibe that you’re tentative, you doubt what you’re saying, others will see it and believe it. It’s far too easy for women to underestimate themselves – let’s get in front of that. Be assertive, don’t let gender be a factor.

Sure there have been plenty of times when a man tried to put me in “my place”, but I use a combination of wit, humor, and steel to let them know how sharp that attempt will be. I don’t even draw blood anymore, well hardly, maybe just a little bit, a tiny, tiny drop. I think having the knowledge and the attitude that I can push back is enough.

If you give off the vibe that you’re tentative, you doubt what you’re saying, others will see it and believe it.

I seem to have an energy about me that resonates leader, people look to me for guidance, it comes naturally and easily for me to step up and lead. From the school yard to the boardroom, I have never been a follower, I walk in front, I sit at the head of the table, I take my place. My place is no different from the men’s. I am a leader and because I am a woman, I look to other women as leaders. I encourage women to step up, I mentor them to find their voice and make them bolder, stronger, and I love to see them bloom into badass managers and leaders. This is my mission – empower women to become change-makers, leaders and to boldly go where no man has gone before.

With this blog I aim to discuss experience, look at issues, suggest solutions and maybe even provide inspiration on how as women we can move to the top where we belong. It is time. Well past time.

“In the future, there will be no female leaders. There will just be leaders.”
— Sheryl Sandberg